Edvard Munch masterpiece The Scream to be auctioned... 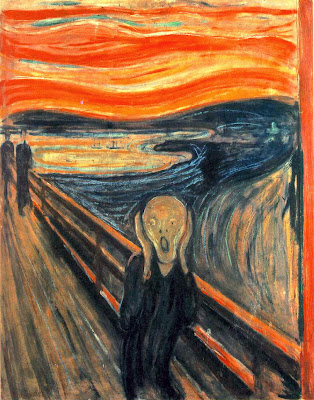 Edvard Munch's famous masterpiece The Scream is to be sold at auction in New York, Sotheby's has announced.

The 1895 work, which is going under the hammer in May, was created using pastels and is the only version still in private hands.

A Sotheby's spokesperson has suggested the artwork's price tag could exceed $80m (£50m).

Prior to the sale, the work will be displayed in London for the first time, before it is exhibited in New York.

The piece, which features a haunted figure in front of a red backdrop, is one of the most recognisable images in the world.

Sotheby's senior vice-president Simon Shaw said the artwork was "one of very few images which transcends art history and reaches a global consciousness".

He added: "For collectors and institutions, the opportunity to acquire such a singularly influential masterpiece is unprecedented in recent times."

The Munch Museum possesses one of two painted versions of the work and another pastel version.

The second painting is displayed at The National Gallery of Norway.

But it is the pastel work, thought to be the most colourful and vibrant of the four, that is going under the hammer.

It is also the only version still in its original frame hand-painted by the artist and includes his poem which explains his inspiration behind the work.

The pastel is the only version that also features one of the two figures in the background looking out to the cityscape.

The work is currently owned by Norwegian businessman Petter Olsen, whose father Thomas was a friend and patron of Munch.

"I have lived with this work all my life, and its power and energy have only increased with time," Mr Olsen said.

"Now however, I feel the moment has come to offer the rest of the world a chance to own and appreciate this remarkable work, which is the only version of The Scream not in the collection of a Norwegian museum."

The Scream has been the target of several high-profile art thefts in recent years.

In 2004, one of the paintings was stolen, along with Munch's Madonna artwork, but they were both recovered and put back on display four years later.