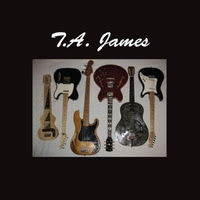 Seriously, the list above barely scrapes James’ resume, and it’s more than worthwhile visiting his website to get the full picture. I’m amazed it’s taken as long as it has to get him into the studio to record under his own name, though I suspect a win at the Piedmont Blues Preservation Society Solo/Duo Blues Challenge boosted his confidence, and gave him a prod in the right direction. The six tracks on his debut EP boast a combination of high-wire instrumentals and solid vocal tracks. His voice is far from perfect, but it does possess a broke-down quality that’s appealing, and it works to fine effect on “...Bad to the Bone...” and “Bone Appetit”. Of the instrumentals “Climb-Lick Maneuver” is particularly handsome.
http://www.tajames68.com/
Rob F.