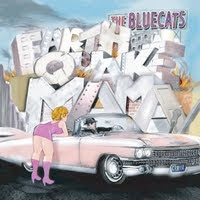 Bluecats - Earthquake Mama (AWB Records)
Is good-time blues an oxymoron, a theoretical impossibility, and yet bands like the Bluecats exist. In their case it might be the California sunshine that puts a smile on their faces. They began as The Venice BlueCats, with a residency at The Venice Bistro, where they practiced and got good, and eventually, in 2007, they released their debut album “Perfect Example”. They’ve taken their time with its follow-up, but they’re busy people, acting, writing, playing with other artists and not least, gigging with the Bluecats.

Their style has been described as “like Fabulous Thunderbirds meets Johnny Winter”, which I take to mean they’re upbeat, powerful and lively, but with some serious chops underpinning their sound. That’s what they sound like on “Earthquake Mama” – they’re having a lot of fun and they’re great players. As for their influences, they’re obviously a band in love with the blues, but they’re equally captivated with classic rock ‘n’ roll. The rhythm section of drummer Steve Ebner and bass man Vick Patron keep the groove going throughout, whether slinky and slow, or fast and full of vim, they’re reliable, and provide the bottom for Keith Pittell’s boisterous guitar and Tony B.’s rock solid vocal and mean harp.

When they’re hitting their stride, they’re impossible to resist. Fans of maximum R&B should check out the rolling title track, with what sounds like a spiked Hammond adding to the joy, the Little Feat-esque “Does She Love Me” and the 100mph “Rollin'”, without delay.
http://bluecatsmusic.com/
Rob F.