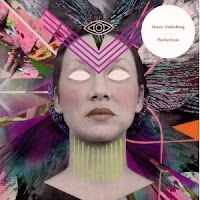 Hanne Hukkelberg - Featherbrain (Propeller Recordings)
My first excursion into Hanne Hukkelberg's dominion, and the experience has been very pleasant, though odd, in a distinctly Scandinavian way. The title track leads out these occasionally eccentric songs ('experiences' rather than songs might sometimes be a closer fit), and it’s a clamorous affair, weaving in and out of a simple melody structure, which, in the past, I’d have found difficult. However, due to the variety of music I’ve been introduced to, via the site, my tastes have expanded, and I’m better for it, both as a listener and a lover of music. "Noah" confirms that Hanne is no singer of the norm, and her voice here sustains the interest with its languid and occasionally somewhat tremulous approach to the lyrics. She can also bring a song to life with a gentle hushed effect, as on "I Sing You", and even with the stronger instrumentation backing her, she still commands the show.

After these first three tracks, we are taken even further out. The discordant sounds that previously surfaced and merged with the rhythms of the tunes now start to take centre stage, and we’re treated to a much wider variety of effects. Strange whistling, shouty (but very effective) choral backing and slaps and claps all appear at some point to join in with the diverse instrumentation, that despite the slightly discordant moments of clanging and thumping, tinkling and strumming, is done to a weird and wonderful turn. This kind of thing is never easy to get right, and an audience can soon be lost when it does go wrong.

I’m disappointed to have ignored her previous material, which apparently, is a little less eccentric, though just as individual. Either way, to hear more of her voice, not perfect (and not meant to be) would be worth the investigation, alone. There are three albums prior to this, and I intend to track them down.
http://www.propellerrecordings.no/
Kev A.