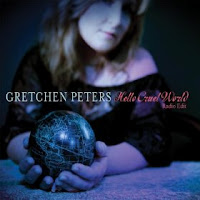 Gretchen Peters – Hello Cruel World (Scarlet Letter / Proper)
Something seems to have stirred Gretchen Peters, of late. She was always a talented songwriter, with the ability to get inside a subject and expose the bits you didn’t necessarily want to see, and along the way she’s picked up Grammy nominations and the respect of Nashville’s songwriting and recording elite. However, her earlier albums were often mired in the mainstream, far too country-straight for my tastes, which I always suspected was down to unadventurous production and arrangements, rather than the quality of the songs.

Since 2007’s “Burnt Toast & Offerings” she seems more intent on taking chances. By country music standards, there’s a degree of rawness to the production, guitars are audibly rocking and there’s a most welcome looseness permeating the proceedings. Lyrically, let’s say she’s got a lot on her mind, from floods and oil-spills, to things that are so personal, it seems almost voyeuristic to bring them up in a review. Standout songs are wherever you want to find them, from the desperate narrative of “Natural Disaster”, the stark balladry of “The Matador”, to the jazzy “Camille”. She’s about to start a long tour of the UK (link below) – go see her…
http://www.gretchenpeters.com/
Rob F.