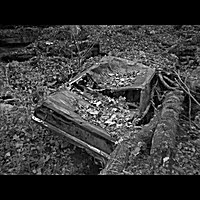 March Rain - Distorted Wilderness (Independent)
March Rain is a one man band insofar that it’s just one man, Nathan Fitch, singing, playing guitar, bass and drums. Unlike the happy chappy who busks on street corners, he doesn’t do it all at the same time. An experienced musician, he’s been actively involved with making melodic sound since he was 13, and he’s played with a number of bands in his home locale of central Kentucky.

Originally a drummer, his talents as a songwriter emerged as he taught himself to play guitar and, had he based himself in New York’s Lower East Side, we’d happily have filed him alongside the anti-folksters who emerged from clubs like The Fort in the mid-‘80s. “Distorted Wilderness” sounds like it was recorded in fairly lo-fi surroundings. There’s a little echo around the guitar and vocals, and its whole presentation is incredibly stark, yet this makes us concentrate our attention on Fitch’s words and the tunes he wraps them up in. We’re not disappointed.

Put simply, he’s got some fine songs. The wintry words of “November” are emphasized by the bleakness of the backing, with only Fitch’s voice providing warmth. The title track depicts the urbanization of the countryside, and paints a gloomy picture, while “Neighbor Ray” is positively jaunty in comparison, and “Seldom Seen” combines everything, with a tune that burrows deep and a lyric steeped in doubt.
http://www.facebook.com/pages/March-Rain/137664956280175?sk=app_2405167945
Rob F.