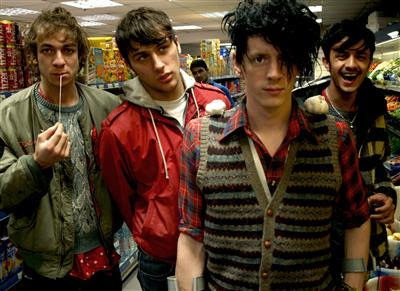 Having spent time recording out in the back of Texan beyond, art-pop quintet Mystery Jets are at last in readiness to release new album 'Radlands', the sequel to the their 2010 suite 'Serotonin'. It's due out via Rough Trade in April, with all vinyl versions of the LP including an illustrated comic by British artist Glenn Fabry.

Says singer Blaine Harrison: "We've always wanted to make a record in America and after touring 'Serotonin' the time felt perfect to go and do it. Our first three albums were entirely conceived and recorded in London so going out to Austin felt like the furthest place from everything we knew".

The band will bolster the release with an extensive seventeen date tour, the first instalment of which is at the Leeds Brudenell on 28 Mar.

Tracklisting:
Radlands
Had Me At Hello
Someone Purer
Lonestar
Greatest Hits
Saviour
The Nothing
Roses
Sister Everett
Lost In Austin
Luminescence

And for those Mystery Jets purists fearing that 'Radlands', given its title, might manifest itself as a flirtation with Weezer-esque quasi frat rock, here's a reassuring album trailer:
www.youtube.com/watch?v=ZvuwBV5gD3M