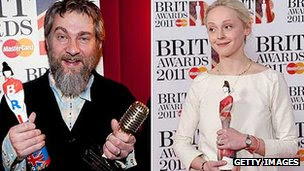 Laura Marling has presented her producer Ethan Johns with an early Brit award, ahead of next week's gala.

Johns was named producer of the year at the Music Producers Guild awards - a prize that automatically earns him the Brit award for best producer as well.

Marling, who worked with Johns on her last two albums, called him "a master" as she presented him his two prizes.

The prize, named after the legendary producer of Telstar and Johnny Remember Me, follows the CBE Lillywhite received in the New Year honours.

In all, 17 awards were presented at the Cafe de Paris in London at an event attended by artists such as Mark Ronson and Mumford & Sons.

Ronson presented the prize for Mix Engineer of the Year to Tom Elmhirst at the ceremony, hosted by Nemone Metaxas of BBC 6 Music.

The late Martin Rushent, who worked with such artists as the Buzzcocks, Hazel O'Connor and the Human League, was posthumously presented with a special recognition award.

There was also an outstanding contribution accolade for Martin Mills, chairman and founder of British record company Beggars Group.

Marling paid further tribute to Johns afterwards, telling 6 Music his was the "only" opinion she sought on her new material.

"The way he works is very in key with the way a lot of artists like to work," said Marcus Mumford, who described the producer as "a vibe man".

"Music is very, very important to me on a lot of levels, spiritually and emotionally," said Johns. "It's not a frivolous thing."