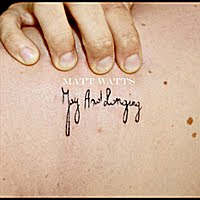 Matt Watts - Joy And Longing (Independent)
Originally from Montana, Matt Watts is now resident in Antwerp (yes, that Antwerp, the one in Belgium). His band, The Calicos, is the Belgian pairing of William Sanders and the spectacularly monikered Guido op de Beeck. Both are multi-instrumentalists. What it was that took him so far from his Montana home is unknown, possibly by all but Matt Watts alone, but whatever his reasons, the change of scenery seems to agree with him. He lists amongst his influences Simon Joyner, Alasdair Roberts and Daniel Johnston, which, if you’re au fait with a certain sort of lo-fi, bedsit-folk singer-songwriter, should provide some clues to Watts’ style and sound.

Confessional, sparse, gentle and quirky, Watts’ use of language demands close attention. Songs like “Come Rest Your Bones” and “I Just Feel Lonesome” are littered with perfect lines and phrases that you’ll want to hear, but you’ve got to get up close to experience them properly. Watts barely raises his voice above a whisper, but the uncluttered framing of his lyrics means it remains accessible. “Lover, Where Have You Gone?” is my favourite, its folk-blues is relentlessly dark, but my goodness, it’s a faultless arrangement of words and music.
http://www.mattwatts.be/
Rob F.