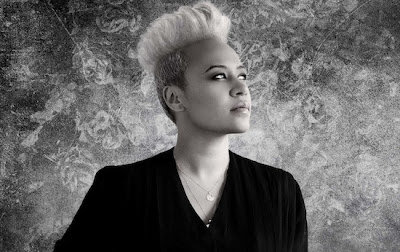 Emeli Sande, the winner of this year's Brit Awards Critics' Choice award, has topped the UK chart with her debut album.

Our Version Of Events knocked Lana Del Rey's Born To Die down one place, while Adele dropped to number three with 21.

I Will Always Love You, from the hit film The Bodyguard, was the highest entry at number 14, I Wanna Dance With Somebody landed at number 20 and One Moment In Time scraped in at number 40.

Houston was buried at a private funeral in New Jersey on Sunday, after a star-studded service on Saturday which featured musical tributes from Alicia Keys and Stevie Wonder.

Houston's Greatest Hits also made an appearance in the top 10 of the album chart, going in at number seven.

Scots singer Sande also enjoyed success in the singles chart, reaching number two with the track Next To Me.

She is due to accept the Critics' Choice at Tuesday night's Brits ceremony at the O2 in London - a prize which has been previously won by the likes of Jessie J, Florence and the Machine and Adele.

Elsewhere in the charts, Brit-nominated boyband One Direction shot up the charts to number nine, all the way from number 26 with their single One Thing, while Coldplay album Mylo Xyloto dropped out of the top 10 from number nine to 11.