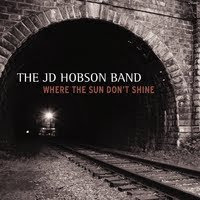 JD Hobson Band - Where The Sun Don’t Shine (Independent)
Having carved himself out a reputation as a talented solo performer in and around his home city of Seattle, JD Hobson formed a small band for his “Where The Sun Don’t Shine” album. Though his Americana / country blues style is perfectly suited to the solo setting, his new recruits, Dan Infecto on bass and drummer Nick Auckland, make a hell of a good noise, add some depth and bring some rock ‘n’ roll drive to the table. Not that the songs, both Hobson’s own and some well chosen covers, lack too much at all, and it should be emphasized that Hobson’s voice is an ideal conduit.

“Where The Sun Don’t Shine” is a wonderfully assured album, with what can only be described as a flawless salvo of opening tracks. Starting with a version of Geeshie Wiley’s “Last Kind Words”, its rolling rhythm and textbook delivery raises the spectre of Wiley’s old ’78, while the band stamp their own identity on a brilliant, but obscure, folk-blues song. Next it’s “Carter Cain”, a song I know by other artists, but I’ve no idea who wrote it. It’s just as good; Infecto and Auckland don’t do anything particularly fancy, but they do know how to rattle a song along. It’s followed by “Darkest Hour Has Passed”, a Hobson original, and it more than holds its own, as does the title track, an undulating country blues. It’s worth checking out for those four tracks alone, but in truth, the rest of the record is of an equally high standard.
http://www.jdhobson.com/fr_music.cfm
Rob F.