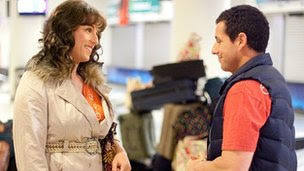 Comedy actor Adam Sandler is leading the charge at this year's Razzie awards with 11 nods, the highest number of nominations in a single year.

The spoof prizes, formally known as The Golden Raspberrys, are handed out to celebrate the worst films of the year.

His romantic comedy Just Go With It got five, and Bucky Larson: Born to be a Star, for which Sandler wrote the screenplay, notched up six nods.

Sandler received a worst actor and actress nomination, for Jack & Jill, in which he plays both the male and female roles.

Co-star Katie Holmes and Al Pacino, who plays himself in the movie, bagged themselves nominations in the worst supporting categories.

Also selected as worst film nominees were Bucky Larson: Born to be a Star, New Year's Eve, Transformers: Dark Of The Moon and the fourth instalment in the Twilight series, Breaking Dawn Part 1.

The movie, based on the Stephenie Meyer series of books, received eight nominations, including a worst actor nod for Taylor Lautner.

He will compete against British actor Russell Brand in the category, alongside Nicolas Cage and Nick Swardson.

In the female category Sandler was not the only male to be up for playing a woman, as Martin Lawrence was also nominated for Big Mommas: Like Father, Like Son.

Former Alaska Governor Sarah Palin was also singled out for playing herself in Sarah Palin: The Undefeated and Sarah Jessica Parker and Kristen Stewart completed the list.

The year the awards, which are usually handed out the day before the Oscars, will be presented on 1 April.

The winners will be determined by members of the Golden Raspberry Foundation.