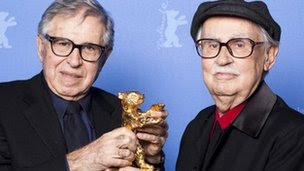 The Italian docu-drama Caesar Must Die has won the Golden Bear prize at the Berlin Film Festival.

The film, directed by veteran brothers Paolo and Vittorio Taviani, follows a group of real-life convicts as they rehearse for a prison performance of Julius Caesar.

Critics said the fact that most of the cast were prisoners intensified the drama of Shakespeare's tragedy.

The film was among the favourites to win the prestigious award.

"We hope that when the film is released to the general public that cinemagoers will say to themselves or even those around them... that even a prisoner with a dreadful sentence, even a life sentence, is and remains a human being," Paolo Taviani, 80, said as he accepted the prize.

His brother Vittorio, 82, read out the names of the inmates who took part in the film.