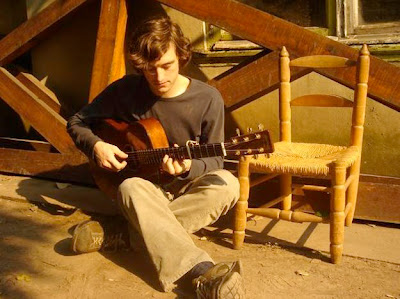 GARETH DICKSON
Quite a Way away
CD 12K 1070
http://www.12k.com/index.php/site/artists/gareth_dickson
http://soundcloud.com/pdis_inpartmaint/gareth-dickson-quite-a-way-1


To say that the last few years of Gareth Dickson's life have been tumultuous would be an understatement. In 2007 he fell in love with a girl from South America, packed up a few essentials from his life in Scotland, and moved to the Argentinian countryside. It didn't turn all fairy tale at that point, however. While there he was shot at, attacked by dogs, and was involved in a very close call when the passenger plane he took to a little town in the Andes was forced down after an engine caught fire. The bullet missed, the aircraft landed, and the dog bites healed; he survived intact, albeit a little more aware of his own mortality, and a good bit more anxious.

"The bullet in all honesty was never meant to hit" he states calmly, it was a robbery gone wrong and he happened to be in the wrong place at the wrong time. The incident in the aircraft was far more terrifying because there was the agonizing time to think and reflect during the plane's unintended descent. "It's interesting to find out how you would react in that situation." Dickson says. "Faced with the possibility that it's really time up, I felt an overwhelming sense of this having been destiny, that it was impossible that I had boarded this aircraft by chance."

These adventures are the reason that in the last 4 years Gareth has not managed to record a new album; the last two releases (Collected Recordings, Drifting Falling, 2009, and The Dance, Sleeping Man, 2010) being old material recorded before the trip. They are also the reason that a feeling of heightened alertness and anxiety pervades this new work. If Collected Recordings was in some way a study in melancholy, Quite A Way Away is a decidedly more anxious affair. "Adrenaline," the first track on the album, opens with the lines "Distant beat, advancing feet, each of us wound within." and in "Get Together" there is something of confusion, if not paranoia, in the speaker wondering "Who was here before now, were there only you and I all night?"

Given the episodes that lead up to Quite A Way Away it's only fitting that the album lands on 12k, whose road from stark, synthetic post-techno, 14 years ago, to the textured electro-acoustic ambience of today has been a gradual but well-documented voyage. The label's flirtations with song structures being fused into its experimentations have defined the label as one to skirt the edges of boundaries and genre labels. But no release has quite stepped out of 12k's bounds like Quite A Way Away. Yet despite the fact that Dickson's music is classified as "singer/songwriter" and there isn't an electronic gadget to be heard anywhere on the album, it's remarkable how well it seamlessly blends into 12k's existing catalog. The minimal, fragile, and engrossing sounds of 12k's well-established brand of experimental music is ever-present in Dickson's quiet finger-picked guitar and breathy vocals that hang on the edge of disintegration. Quite A Way Away is somehow as much "12k" as it is a step in a totally new direction.

Dickson, who hails from Glasgow, often gets comparisons to Nick Drake but it's important to mention the influence he takes from experimentalists like Brian Eno, Aphex Twin, Bert Jansch, and Glenn Gould. His music is characterized by an intimacy gleaned from his dream-like approach to singing and playing guitar as well as the immediacy of being captured shortly after being written by whatever recording device is closest at hand, be it a cassette machine, handheld recorder, or 4-track. His use of analogue delays and reverb add to this soft, spacey vibe. The lo-fi nature of his sound harbors all of the cracks, flaws and rough edges of humanity, soul, and the deeply personal circumstances that surround the creation of art.

Up until this point Gareth had been traveling as one of the mainstay's in Vashti Bunyan's touring band which took him around the world playing some of the great venues along the way, such as the Carnegie Hall in New York and The Barbican in London. Vashti invited him to join her after she heard one of his tracks on the FatCat records website. He was also asked by Max Richter to record some guitar for a film soundtrack and has recorded and toured with Juana Molina.