One Little Plane 7 May album on Kieran Hebden's Text Records‏... 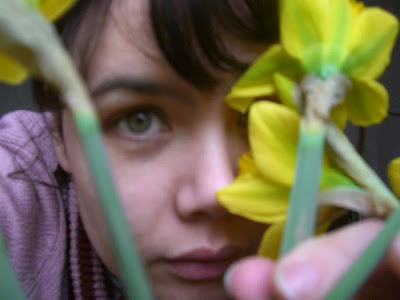 Kathryn Bint follows her perfectly formed debut Until (2008) with an album that reveals her remarkable range as a musician and songwriter. Her tender vocals still send husky shivers down the spine, but Into The Trees is so much more than beautiful folk songs.

This is an optimistic record in which “hope stretches out like a leaf”. Recorded in 2010 at Bryn Derwen studios in North Wales, while Bint was pregnant with her first child, these songs are imbued with a tangible determination and hope. As she sings on ‘Simmer Down Simmer’: “We’ll ride until we fall and then get back up”.

Bint was born in Australia, grew up in Chicago, and moved to London nine years ago, where she began writing songs in earnest. After the release of Until, she got together with Henry Scowcroft and Lucy Jamieson, with whom she toured Europe and played festival dates.

Produced by Kieran Hebden (Four Tet), Into The Trees weaves a fabric of different sounds, united by Bint’s elegiac voice and strong storytelling. Radiohead’s Colin Greenwood lends the album his bass powers, and tracks like ‘Paper Planes’ and ‘I Know’ rock with a swagger that surprises and yet fits perfectly with the whole. The musicianship of Scowcroft and Jamieson is on full display as the record moves deftly from the acoustic warmth of ‘Hold You Down’ to the sunshine pop of ‘Simmer Down Simmer’ to the dreamy synth of final track ‘Synthesizer’. Hebden’s touch is a delicate one; there is a modesty and clarity to these songs that speaks to the confidence and judgment of those involved. ‘If You Ask’ is so simple and clean that no extra seasoning is required.

Hebden’s influence is most apparent on ‘Bloom’—a spare, electronic piece with the precision of his Four Tet work—and yet this track is the heart of the album, encapsulating its central themes of people among nature. Lovers intertwine like vines, asleep beneath a canopy of trees, holding hands in leaves of grass. These songs are Whitman-esque odes to man’s place in the natural world; they remind us to stop and listen, to live in the moment. As we hear on the album opener ‘She Was Out In The Water’: “Honey, I don’t believe in majesty or things that you compare, I just want to be here now tasting the salty sea air.”

And yet, there is majesty in these songs. In ‘It’s Alright’, One Little Plane suggests “we reach for something like stars”. This is pure modesty; Into The Trees most definitely reaches for stars, and it touches them too.