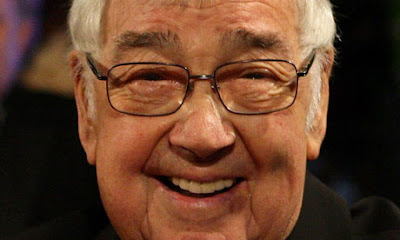 Northern Irish comedian Frank Carson, who was best known for the catch phrases "It's a cracker" and "It's the way I tell 'em", has died aged 85.

Carson had suffered from poor health and his family said he passed away at his home in Blackpool, Lancashire.

The Belfast-born comic rose to fame in the 1960s after winning talent show Opportunity Knocks three times. The Comedians was among his TV shows.

TV presenter Eamonn Holmes said: "We will never ever see his like again."

Carson had a successful operation for stomach cancer last year but had told the BBC his health had been a problem for some time.

His family's statement said the "husband, father, Gaga and comedian set off for his final gig today".

"He went peacefully at his home in Blackpool surrounded by his greatest fans - his extended family. We will be taking him home to Belfast to lay him to rest and celebrate his joyful life.

"It's quieter down here now. God help them up there!!"

Holmes, who was a long-term friend, said: "The term legend is often overused - but Frank Carson was a legend and we will never ever see his likes again.

"I knew him since I was a child because he was a friend of my father. He was just a complete bundle of energy and at 85 he was still going and still cracking jokes."

Carson, the son of a binman, was born in Belfast on 6 November 1926 to a family of Italian descent.

He grew up in the Little Italy area of the city and worked as a plasterer and electrician, and then joined the Parachute Regiment.

He served for three years in the Middle East in the 1950s, before his attention turned to showbusiness.

Spotted for his stand-up work, he became a popular performer on Irish television before moving to England.

The comedian appeared in the TV music hall revival show The Good Old Days, before his appearances on Opportunity Knocks propelled him into the mainstream.

He went on to appear alongside fellow comics Charlie Williams, Bernard Manning, Mike Reid and Jim Bowen in the 1970s TV series, The Comedians.

A familiar face on British TV for the next two decades, Carson's other shows included Who Do You Do? and variety show The Wheeltappers and Shunters Social Club.

He became known for his self-deprecating sense of humour.

In 1975, Carson signed up to play Paddy O'Brien in Spike Milligan sitcom The Melting Pot, but the show was cancelled shortly after the first episode was broadcast.

He later claimed Milligan had mocked his constant stream of wisecracks by writing a joke of his own: "What's the difference between Frank Carson and the M1? You can turn off the M1."

Carson continued to work following a heart operation in 1976, and was a frequent guest on children's series Tiswas.

He was also at home on radio, appearing alongside David Frost and Leslie Crowther on 1980s BBC Radio 2 show Pull The Other One.

In 1987, Pope John Paul II knighted Carson into the order of St Gregory at a private audience in Rome, in recognition of his charity work in Northern Ireland.

"He kissed me and said I was a wonderful man," Carson later told the Daily Mail.

"I was in there for 17 minutes - the priests time it. President Reagan only got 11, so that was nice."

Despite his showbusiness career, the comedian also served as Mayor of Balbriggan in North Dublin twice.

"It is my favourite place in the world," said Carson, who spent his honeymoon in the area, "it always brings back happy memories".

Following the ascent of alternative comedy in the late 1980s, the performer largely returned to his roots in stand-up, and was performing hundreds of shows a year as recently as 2008.

He moved to Blackpool in later life, where he became involved with the Eurosceptic UK Independence Party.

Speaking to the Belfast Telegraph last year, Carson said he wanted to be cremated and his ashes scattered around the Corporation Street in Belfast, where he grew up.

He leaves a wife, Ruth, daughter Majella and sons Tony and Aidan, as well as 10 grandchildren.

Others to pay tribute to Carson included friend and broadcaster Chris Tarrant, who appeared with him on Tiswas.

Tarrant told the BBC: "I think without exception he was the funniest man I've ever met in my life. What a wonderful sense of fun and mischief and laughter.

"All our lives are the richer for Frank passing through, but the poorer for him going. He was a complete one-off."

He said: "He was a good comic and great company. He represented that front-of-cloth comedy, it's a different genre from the kind of comedy that we have today, where younger and smarter comedians play big halls - he was a club comic.

"People's sense of humour has changed, this generation laugh at different things. At that time, comedians could talk about fat women and people with bow legs, I doubt whether he'd enjoy going on TV today, with all the strictures that are put on people.

"He was a good man - you're always smiling with people like Frank around."

"He lifted spirits in times of despair and during some of the worst days of the Troubles with his sparkling wit which made him very popular in Ireland and throughout Britain."