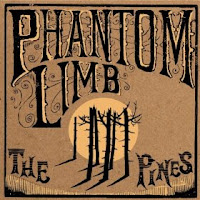 Phantom Limb – The Pines (Naim Edge)
Think of Bristol and it’s bands or artists like Massive Attack and Tricky that quickly come to mind. Think further back and it’s the city’s post-punk and reggae heritage, represented by bands like Glaxo Babies, Essential Bop and Talisman. I don’t know where Phantom Limb fit into the Bristolian musical landscape; the natural habitat of their country-soul / southern rock hybrid is somewhere below the Mason-Dixie line. Not that location was ever a problem for Creedence Clearwater Revival, the Rolling Stones or The Band, who all appropriated southern American music and made some wonderful records.

Phantom Limb isn’t up there with those three groups, but still make plenty of satisfying music on “The Pines”. Singer Yolanda Quartey has got an emotive soul voice, and the band is fully versed in the Muscle Shoals tradition. The big numbers, “Give Me A Reason” and “Harder Than Stone” are showcases for Quartey’s dynamic vocals, but they’re better still when they rock a little; “Gravy Train” rolls sweetly and “Missy” usurps some of the spirit of The Black Crowes, which isn’t altogether surprising, as the album was produced in California by Crowes’ guitarist Marc Ford.
http://www.naimlabel.com/
Simon M.