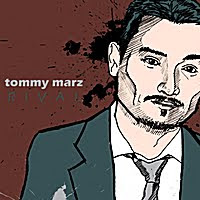 Tommy Marz – Rival (Stagefiend Records)
For the last eight or nine years, Tommy Marz has fronted Go To Zero, a grungy guitar outfit that built up a considerable following around their home state of Michigan. Interestingly, though they were obviously in thrall to bands like Soundgarden and Stone Temple Pilots, they retained a distinct pop edge, so perhaps we shouldn’t be surprised that Marz’s debut solo album abandons the rock and instead settles on a contemporary pop sound. Whether it’s a calculated tilt at commercial success or a long-held desire to break free from the trappings of a rock band, and to release his inner John Mayer, I’ve no idea, but I can confirm he sounds like a natural. It’s also worth noting that there hasn’t been a complete break from his Go To Zero bandmates, most of whom turn up on “Rival”, co-producing, playing and even designing the artwork.

From the opening “Love (Around You)” we’re in pop-singer-songwriter territory. The production is crisp and the hooks pronounced. It’s followed by a cover of George Michael’s “Faith” (Michael is perhaps the ultimate pop-singer-songwriter) and surely its inclusion here is nothing short of a statement of intent, or even a declaration of independence. It’s a fairly straight cover, but no less enjoyable for that. “All My Energy” has a great ‘80s feel to it, without the restrictive production which has blighted most of that decade’s pop output, and “Polly Anna” might once have been the obvious single, a perfect calling card to radio and press. All in all, “Rival” is a thoroughly agreeable pop record, with plenty of fine songs and radio-friendly hooks, and Marz definitely has the talent and experience to see it through. All that’s lacking is a huge audience, and unfortunately, that’s the most difficult bit.
http://tommymarz.com/
Rob F.