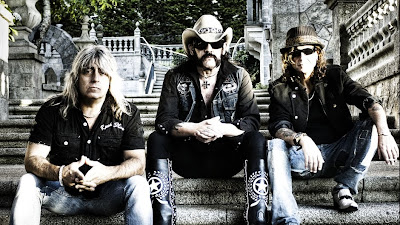 Now Motorhead are distancing themselves from a box set of their music. After Elvis Costello last year told his fans not to buy a £200+ box set of his music put out by Universal, Lemmy has hit out at a $600+ box set of his band's early work that has been put out by a company called PID, which owns the rights in those recordings. The box set has fifteen discs and other assorted goodies like photos and badges, though the price point does seem rather high.

Says Lemmy on Motorhead's website: "Unfortunately greed once again rears its yapping head. I would advise against [buying this box set] even for the most rabid completists!" The official post also notes: "Motörhead have no control over what's done with these early songs, and don't want fans to think that the band is involved in putting out such a costly box set".

The statement adds that Motorhead have a new album and DVD out, which Lemmy and co would much rather fans buy than the overpriced oldies set. That option would presumably leave fans who have set aside $600 for the box set with quite a bit of spare cash. Though last week I saw some Motorhead skis for sale, maybe they could get themselves some of those too.