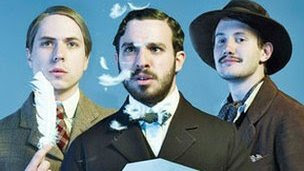 All three star in the six-part series as hapless conscientious objectors left behind in a sleepy village while their contemporaries fight on the front line.

A pilot for the show appeared on Channel 4 last year.

Thomas, who played Simon Cooper in The Inbetweeners, said the three had a "rich setting" to work with.

Sky said it picked up the series, which will be shown next year, because it had "fallen in love with those naughty chickens".

Thomas and Bird's collaborator, Sweet, was named best newcomer at the 2009 Edinburgh Comedy Awards. The three met while studying at Cambridge.

Thomas and Bird have enjoyed huge success with The Inbetweeners TV series and subsequent movie, which took £45m at the box office.