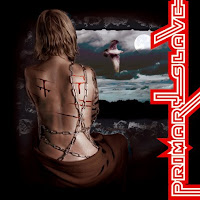 Primary Slave - Another Mark is Drawn (One Eyed Toad)
Originally formed in 1998 (with a line-up including Cradle of Filth lead guitarist Paul Allender) industrial outfit Primary Slave were attracting enthusiastic attention from the likes of Kerrang and Metal Hammer when their burgeoning career was cut short by the untimely death of front man Mark Giltrow. Five years on from the motorcycle accident which claimed him their second album, ‘Another Mark is Drawn’, has been painstakingly completed and elaborately packaged for release as a lasting testament to the creative legacy of a young musician who many clearly cared a great deal about.

Whilst everything about its presentation screams ‘death metal’ at you, it’s actually a very accessible document. Opener ‘Powdered’ might bounce in a way that veers worryingly close to Limp Bizkit, but the more sophisticated soundscapes that follow more than compensate. They’re imaginative and almost lush in their own way, revealing an impressive breadth of both songwriting and craftsmanship. ‘I Feel Free’, ‘Cums a Round’ and ‘Up Sailing’ stand as high quality examples of their particular genre, being at once powerful, engaging and digestible, and pose the inevitable question as to what Giltrow and his band might have achieved given more time.
http://www.primaryslave.com/
Neil B.