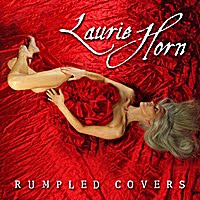 Laurie Horn - Rumpled Covers (Independent)
Laurie Horn’s “Rumpled Covers” is a seven-track mini-album of cover tunes. However, the Detroit native makes it difficult for herself by choosing rock standards, the sort of songs that even people who don’t like music can sing-a-long to. She gets around the problem of over-familiarity with some adventurous arrangements, some jazzy flourishes, and a series of first class performances.

Beginning with Foreigner’s “Double Vision”, it’s probably the least well known song on the record, so provides an ideal launch Where the original was presented in typical MOR fashion, Horn slows it down, retains the polish, but adds a little groove; a good start. Next it’s The Eagles’ “Witchy Woman”, which is given a noirish makeover and sent on its way. Journey's "Lovin' Touchin' Squeezin'" gets some pre-rock ‘n’ roll, Les Paul style guitar and is well and truly re-invented. It’s outstanding – the best track here.

The Doors’ “Roadhouse Blues” is a tricky one, but again, a wholly new interpretation, its rockabilly beat brings to mind Imelda May, which tends to be a good thing. Nillson’s “Without You” showcases Horn’s vocal beautifully, and her version of Bryan Adams’ “Run To You” proves the band can rock when they want. They end with Led Zep’s “Whole Lotta Love”, almost stripped of its riff, its heavy beats are vaguely evocative of Sneaker Pimps.
http://www.lauriehorn.com/index
Rob F.