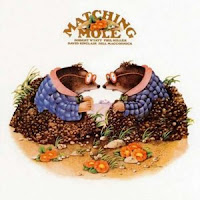 Their debut, released in 1972, was, for the most part, written by Wyatt. The album begins with the classic “O Caroline”, with Wyatt’s poignant lyric – it was written after his break-up with artist and journalist Caroline Coon – complimented and augmented by Sinclair’s gently sublime melody, his Caravan roots plainly on show. Contrast that with “Signed Curtain”, which is musically arresting, but features some of Wyatt’s most trite lyrics. After that it’s largely instrumental, with Phil Miller’s “Part Of The Dance” standing out, primarily because it’s jazz inflected fusion rather that avant-prog or hard psychedelia, though Wyatt’s “Dedicated To Hugh, But You Weren’t Listening” inhabits a space somewhere between early Floyd and the Dead’s “Dark Star” and is in parts, quite stunning.

Esoteric’s double disc set features a wealth of bonus material, from the single version of “O Caroline” (I can’t imagine what Tony Blackburn made of it), to a superior version of “Signed Curtain” that relies on vocal sounds rather than words. The 21-minute version of “Part Of The Dance” is far spacier than the original, and the 1972 Peel session that takes up the final part of the second disc is well worth hearing. 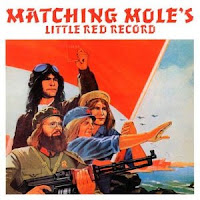 Matching Mole’s “Little Red Record” followed the debut album just seven months later, originally appearing in November of ’72. Produced by Robert Fripp, with Dave MacRae replacing Sinclair on keyboards, and Brian Eno making a guest appearance. It’s a more democratic record than its predecessor, with Wyatt concentrating on lyrics, not that there’s much here that you’d describe as a song, and the group composing the music. It is, by and large, considered the more consistent of the two Matching Mole studio albums, and its high points are just as impressive as those on the debut.

“Starting In The Middle Of The Day We Can Drink Our Politics Away” may only be a single line sung over a repeated piano riff, but it’s an impressive start. “Marchides” is in much the same vein as the jerky jazz-fusion that Wyatt had formulated in Soft Machine, and provides one or two memorable segments. “Nan True’s Hole” is musically striking and features dialogue between prostitute and punter, and “Gloria Gloom” includes atmospheric synthesizer courtesy of Eno, whilst words and phrases come and go, before Wyatt’s vocal makes an appearance some four minutes in. The bonus disc includes a BBC In Concert performance from July 1972, and three alternate takes.
http://www.cherryred.co.uk/
Rob F.