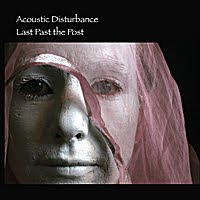 Acoustic Disturbance - Last Past The Post (Independent)
Acoustic Disturbance are an alternative quintet from Seattle, not that they’re overly enamoured with the “alternative” tag, and the more I find out about them and listen to their “Last Past The Post” album, the more I understand their reticence. Anyway, “alternative” as a noun has lost its meaning when used in conjunction with musical genres. Major labels have hijacked the word (along with “indie” and “punk”) and they show no signs of releasing it anytime soon. Acoustic Disturbance seem wholly outside the mainstream, from their death mask artwork – alarming, yet strangely alluring – to their sound, a menacing, melodic take on post-punk, dark vibes and what we used to call the new wave.

The record begins with 48 seconds of epic drone, which would have sounded perfectly at home on the “Bladerunner” soundtrack. Next it’s “Impossibility”, with undeniable pop presence and perfect structure, it sits somewhere between The Cars and Magazine. 30-plus years ago it would have been a classic 7-inch single, a jukebox mainstay in the cool pubs and bars, but now? Who knows? “Small Circle” is a lesson in buzzsaw guitars, and how not to overwhelm a fine song with them, and when they take their time with a piece, “Guess I Made a Mistake” and “Fill You Up” are early examples, they’re at their moody best, like late period Wire or the Velvet Underground, stripped of screech.
http://www.acousticdisturbanceband.com/
Simon M.