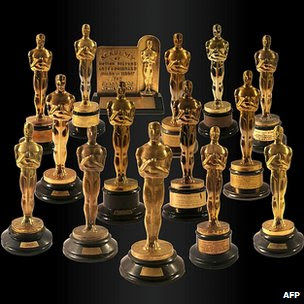 A collection of 15 Oscar statues sold for more than $3m (£1.8m) at an auction in Los Angeles, just two days after the Academy Awards took place.

The iconic gold trophies went under the hammer despite members of the Academy protesting against the sale.

Normally, winners are banned from selling their awards, but these prizes were handed out before that rule came into place, in 1950.

The sale included Oscars for the films Wuthering Heights and Citizen Kane.

The highest bid in the online auction went to Herman Mankiewicz's Oscar, which he won in 1941 for the screenplay to Citizen Kane.

In a statement the Academy said: "Members and the many film artists and craftspeople who've won Academy Awards believe strongly that Oscars should be won, not purchased,"

"Unfortunately, because our winners agreement wasn't instituted until 1950, we don't have any legal means of stopping the commoditisation of these particular statuettes."

The 1950 agreement is still signed by all Academy winners. It states that Oscar statuettes can only be sold back to the Academy for the nominal sum of $1 (63p).