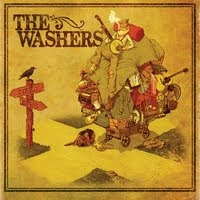 The Washers - Tired Eyes (Independent)
From East Bernard, a small town in Texas, The Washers play a hybrid form of Americana – a broad church if ever there was – which of course takes in country and folk, but doesn’t forget to rock. They’re fortunate to have four vocalists, all of whom are happy singing both lead and in harmony, and the quality and versatility of the group’s vocals is the first thing you’ll notice as “Tired Eyes” plays out.

Their debut record, 2010’s “Devil’s Name” was a first-rate collection, full of energy, vim and fine songs, but their new one is more assured, as if the members have grown into their roles and their confidence in their capabilities as singers and arrangers has spiraled. Musically they’ve stepped up a gear too. Banjo, keyboards, mandolin, accordion and something called a vibroslap augment their basic guitars, bass and drums line-up, adding layers and depth.

Distinctly southern in their sound, standout songs invariably rock, and there’s no shortage of them. Beginning with “Good Ol' Days”, lead guitarist Rio Tripiano hits the ground running before the boys settle into a warm roots rock groove. “Everybody But Me” is even better. It’s as catchy as hell, with plenty of opportunity for fist in the air theatricals. When they take their foot off the pedal, on tracks like “Two Left Feet” and “Bag of Bones”, they do so without sacrificing an ounce of oomph.
http://www.thewashersmusic.com/
Rob F.