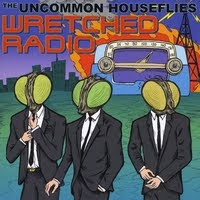 The Uncommon Houseflies - Wretched Radio (Better Days Records)
In 1986 Frank Zappa posed the question “Does Humor Belong In Music?” Considering Frank’s oeuvre included such gems as “Don’t Eat The Yellow Snow” and “Penguin In Bondage” we must conclude that his own answer was affirmative. I think it’s safe to assume that The Uncommon Houseflies are very much in agreement. Previous albums “Zombie Clowns Ate Your Sister's Kitty” and “Excrement Weather” have featured many sing-a-long family favourites including “Disgruntled Shooter (In the Nursing Home)”, “Pink Party Vomit” and “Beating Up Hippies”, and fans of those particular recordings will not be disappointed by the fare on offer here.

“Wretched Radio” is chock full of irreverent subject matter, from being dumped for a longhair (“The Jam Band Incident”) to misguided religious enthusiasm and giving up underwear for lent (“Commando for Jesus”). Originally inspired by The Ramones, they’re not averse to wrapping feisty power-pop-punk tunes around their words of wisdom, but other styles, including alt. country and rap get a look in. Needless to say, your own response to the original question will help make your mind up whether this is a band you want to hear. If you’re partial to a bit of comedy then jump right in. I’m sure you’ll have a chuckle or two when you hear the tracks already mentioned, and you’ll be equally chuffed with “Border Disorder (The Canada Song)” and “Space Monkey” – everyone likes a hairy astronaut song.
http://uncommonhouseflies.com/
Rob F.