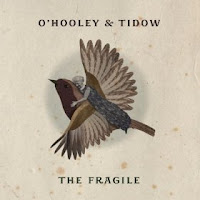 O’Hooley & Tidow – The Fragile (No Masters Co-Operative)
Belinda O’Hooley first came to prominence in folk circles as a member of The Unthanks, and can be heard on their wonderful 2007 album, “The Bairns”. She left the sisters the same year to join forces with Heidi Tidow, and in 2010 they released their debut, the menacing and melancholic “Silent June”. Many of the ideas and topics explored then are also present on their new album.

“The Fragile” maybe a little lighter in tone, but it’s marginal. Themes of death and old age are repeatedly returned to – both worked for periods in homes for the aged – and the desperate nature of many of the songs is matched only by their stirring performances. Their voices, in particular the a cappella versions of Massive Attack’s “Teardrop” and the traditional “She Lived Beside the Anner”. When the songs are accompanied, it’s by strings, piano and accordion, which add plenty of sonic depth, though not as cavernous as the words, especially on the “death” songs, “Mein Deern” and “Ronnie’s Song”.

The album ends with “Madgie In The Summerlands”, a song for a departed cat, which should’ve been morose, but instead is enchanting and almost amiable. It certainly ends the collection on a positive note.
http://ohooleyandtidow.com/
Rob F.