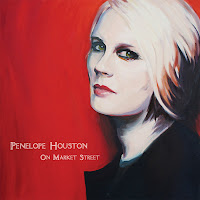 Penelope Houston – On Market Street (Glitterhouse)
Penelope Houston’s musical calling began in 1977, leading The Avengers, the San Francisco punk outfit who supported the Sex Pistols at the last ever show (check out the “We Are The One” EP. On the second side, “Car Crash” is particularly meaty). Since those early days, she’s collaborated with Howard Devoto and carved herself out a respectable solo career, which has recently been put on hold as she’s hit the road with her reformed band. Now back recording under her own name, “On Market Street” is her seventh solo album and her first since 2004; punk rock guitars have been replaced with Hammond and Wurlitzer organs, and on “Winter Coats” and “Meet Me In France” a string quartet.

Houston’s sound, a combination of sophisticated chamber pop, Southern Americana and urban alt. country rarely disappoints, and provides a series of genuine standout tracks. “You Reel Me In” is soulful and lyrically isn’t unlike the sort of thing Lucinda Williams was writing circa “Car Wheels…”. “Scrap” is positively playful, and “Come Back To The Fountain” is gentle, sweeping pastoral pop. Perhaps best of all is “If You’re Willing”, the song that inspired the album, an epic distillation of Houston’s then state of mind.
http://www.penelope.net/
Rob F.