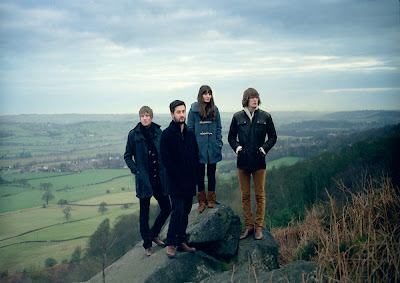 PRAISE FOR ELLEN AND THE ESCAPADES:

“Ellen Smith’s captivating vocals are the highlight in a fantastically catchy collection of songs that tread a line between folk, pop and rock, with plenty of harmonica thrown in for good measure.... these guys are definitely one to watch.” Clash Magazine

“…enormously catchy songs. They would fit nicely into the music collections of the 400,000 Brits who’ve bought Mumford & Sons’ album…could easily fall head over heels for their warm, literate songs.” The Guardian

“...stunning set from Ellen and the Escapades, practically dripping with poppy modern folk credibility, and Ellen Smith’s admirable vocals were some of the best I heard all weekend.” The Line of Best Fit

The past two years have been an exhilarating journey for Leeds-based quintet Ellen and the Escapades. After winning 2010’s Glastonbury Emerging Talent Competition and playing BBC Introducing stages at both Reading and Leeds Festivals, the band have gone from strength to strength.

Ellen’s dusky, enchanting vocals and strikingly well-crafted songs have already captured the attention of BBC Radio 2, BBC 6 Music and Amazing Radio. Fans include Lauren Laverne and Steve Lamacq, and the band were recently playlisted for ten weeks on Amazing Radio. Supporting the likes of Josh T. Pearson, First Aid Kit and Paolo Nutini has brought the band’s music to even bigger audiences all over the country.

Summer 2011 saw an abundant string of festival appearances for Ellen and co, including major festivals Glastonbury, Bestival and Green Man, and a range of smaller boutique festivals such as 2000 Trees, Lounge On The Farm and Winterwell. Their Green Man appearance on one of the festival’s biggest stages attracted a full capacity crowd and resulted in unprecedented press attention, including hugely complimentary reviews from Clash Magazine and The Line of Best Fit.

Autumn single ‘When The Tide Creeps In’ hit the top spot in both the Amazon.co.uk Folk and Amazon.co.uk Rock Charts during the week of its October release, and the band’s subsequent Pledge Music campaign saw them reach 100% of their target in just eight days. The next two months saw an excited band make plans towards their debut LP and take to the road for countless live dates as far apart as Exeter and Edinburgh.

Ellen and the Escapades release the title track from their highly anticipated debut album ‘All The Crooked Scenes’ on 2nd April followed by the album, released via Branch Out Records on 16th April with a London launch party hosted by Communion. Before this, they head out on a 20-date UK tour where they will showcase tracks from the forthcoming album and sell a limited run of special edition CD/DVD advance copies prior to its official release.