New LP of Music from Yemen... 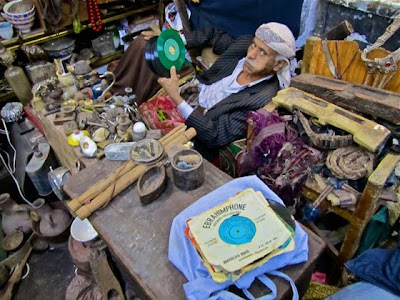 New Release: Compiled by Chris Menist, Qat, Coffee & Qambus: Raw 45s from Yemen features vintage oud and vocal music inspired by the qat-chewing, coffee-sipping, qambus-playing culture of Yemen. Although part of the classical Arabic musical tradition, the music of Yemen takes its rhythmic lead as much from the East African coast (a mere 20 miles across the Red Sea) as the surrounding Arab Peninsula. Little has been written about the music and culture of one of the world's oldest civilizations, and each 45rpm disc gives a small glimpse of the poetic tradition, the unique local oud styles as well as an insight into people's day-to-day lives, or the highs and lows of human relationships. Overall, the compilation gives a flavor of the sights and sounds of Yemen, with detailed notes that tell the story of the hunt for music that has mostly lain forgotten in the antique markets of the capital, until now. (Available via Credit Card and Paypal)
Click here to see photos Chris took on his trip to Yemen.
Click here to listen to one of the tracks from the record.