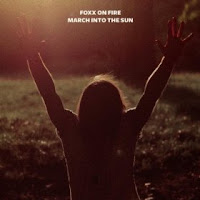 Foxx On Fire - March Into The Sun (Independent)
If you’d like 'pop-music-on-a-stick', then here it is, all 17 minutes of it, though it seems to tumble past in half that time. A welter of energized instruments surrounds the solid, occasionally high-pitched vocals, and together the voice and cacophonous roar seem to plunge headlong into each tune - with no regard for the safety of the listener. The high point comes at the mid-point of “March Into The Sun”, a five song EP that initially startles, and then errs towards delightful. "Into The Light", is an electric flashgun of sound, brimming with the confidence so apparent on the first two tracks, but with a tasty chorus, reminiscent of the Rare Bird song “Baby Listen”. The whole thing is charged with a youthful energy that reaches out and pulls you in; the sort of thing that you might have seen on TOTP ten years ago. It has 'hit' written all over it, inside and out, like a great indie pop stick of rock.

Things are not allowed to tail off either. The ‘70s feel of "Mission Abort" is in a similar tempo, but placed firmly within that particular decade. The final track is a reprise of the first song, the title track, "March Into The Sun", and the band are able to morph it into a prog instrumental, when the opening track is full-on indie pop with a slight, but distinct, ‘60s feel to it. All in all this is one of the very few things that I’ve heard that manages to make today's alt. pop sound danceable, across the decades, but it does need you to approach it with a twinkle of magic retro-dust in your pumps.
http://www.facebook.com/foxxonfire
Kev A.
Posted by Bangs at 12/03/2011 03:37:00 pm