David Bowie Top of the Pops footage found by cameraman... 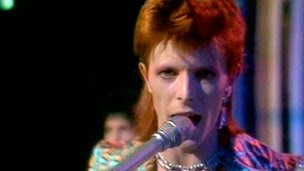 A retired cameraman has been speaking of the moment he realised he owned footage of David Bowie on Top of the Pops which was thought to be lost.

He said: "I just couldn't believe that I was the only one with it. I just thought you wouldn't be mad enough to wipe a tape like that."

It was unveiled on Sunday at an event held by the British Film Institute.

The annual event, Missing Believed Wiped, was the first time the footage had been seen since January 1973.

Mr Henshall said he only kept it because he wanted it for his showreel.

In the footage he used Telefex Fisheye lenses which he had designed himself. He also ended up in the background of one of the shots.

After the recording he asked producers for a personal copy on 2in (5cm) broadcast videotape.

Mr Henshall said: "I didn't realise that it had been wiped by the BBC.

"They'd been looking for it for years, hoping that somebody had maybe pointed an 8mm home movie camera at the screen, because there was no VHS in those days.

"I didn't realise that anybody wanted it. I'd just had it because it was my Fisheye.

"I had loads of ideas for optical effects back then."

Bowie's performance of Jean Genie was recorded on 3 January 1973 and transmitted the following day for the first and only time.

After realising he had a "rarer than rare" piece of television history, Mr Henshall went to Westpoint Television in London to view the footage.

"The hairs stood up on the back of my neck," he said.

"There it was in full broadcast quality. Amazing."

Among other items recovered and shown at Sunday's event were two missing episodes of Doctor Who, a television play by Dennis Potter called Emergency Ward 9 and a comedy sketch featuring Peter Cook and Dudley Moore.

The first transmission of Jean Genie since 1973 will be in a BBC4 documentary, Tales of Television Centre, to be broadcast in the new year.