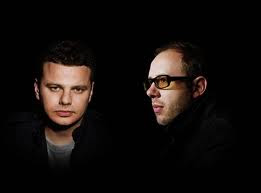 CHEMICAL BROTHERS ANNOUNCE CINEMA RELEASE FOR TOUR FILM
The Chemical Brothers have announced that they will screen their new concert film 'Don't Think' in cinemas in the new year. There will be screenings in 20 cities around the world, including London, on 26 Jan, before going on general release in the UK on 3 Feb.

Filmed at this year's Fujirock Festival in Japan, 'Don't Think' was directed by long term Chemical Brothers collaborator Adam Smith and is apparently the first ever concert film to be made with Dolby 7.1 Surround Sound, which was mixed by The Chems themselves.

Says Smith: "After eighteen years of working on The Chemical Brothers' live show we have finally captured it on film; you could almost say it's eighteen years in the making. The aim was to create a different type of concert film for a different type of show. I wanted to capture what it is like to experience the show from right in the middle of the crowd as well as showing and combining the visuals featured in the show with the footage we captured on this one night; to see how the music and visuals emotionally affect and connect with the audience. Over the course of the film, we are taken on a journey through the psychedelic trip that is the Chemical Brothers live experience".

Chemical Brother Tom Rowlands added: "In the recording of a single show - a single night on a Japanese mountainside - Adam Smith has managed to capture the atmosphere of a very special festival appearance. Come see how it feels to feel, be overwhelmed, intoxicated, swoonerated. Surrender to the void".

You can see the trailer here: www.youtube.com/watch?v=21UItm9UCr0