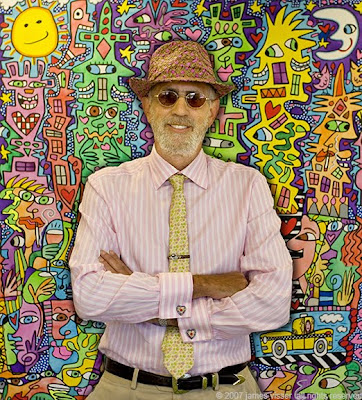 Alexander Lieventhal, from Art 28 GmbH & Co in Stuttgart, Germany - which exhibits and sells Rizzi's work - said the artist passed away peacefully at his New York studio on Monday.

"With his art, what you see is what you get," Mr Lieventhal said.

Some of Rizzi's creations include images for German postage stamps and a tourist guide published this year.

"Any child can look at it and understand what he's trying to convey, a celebration of life," Mr Lieventhal added.

A prolific designer - in 1980 he designed the cover for the first album of new wave band, the Tom Tom Club - a side project of Talking Heads' Tina Weymouth and Chris Frantz.

He also animated two music videos for the band.

Moving between the worlds of architecture and graphics, Rizzi also designed the Happy Rizzi House - an office building in Germany, the front page of a newspaper in Hamburg and three versions of the New Beetle for Volkswagen in 1999.

In 1996, he became the first official artist for the Summer Olympics in Atlanta and - a year later - the Montreux Jazz Festival in Switzerland.

In 1998, he was selected to produce official posters for the Fifa World Cup in France.

The artist studied art at the University of Florida, where he developed the three-dimensional technique that helped establish him as a street artist in New York.

Rizzi was due to hand in three separate course work projects for classes in painting, printmaking and sculpture. But, short on time, he combined all three techniques by reprinting his own etchings and building them up in 3D using wire to add depth.