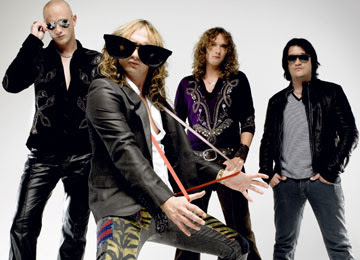 THE DARKNESS DISCUSS NEW LP
Since The Darkness' Christmas hit 'Don't Let The Bells End' is ringing in our ears this festive season, now seems as apt a time as any to hear about their in-progress new album. Doesn't it?

Having reunited with the group's original line-up earlier this year, frontman Justin Hawkins tells Billboard: "[We've got] nine of the required songs done, all finished, all sounding shining and good. We've got about two weeks of recording in January, and bits of it are already going off to be mixed even as we speak, so it's kind of nearly finished now".

His brother Dan adds: "Rather than a big-name producer we decided to do it ourselves, as per the first record. We just wanted to develop the songs and make sure they were really spot-on and basically take a minimal approach across the board - apart from when we needed to go really over the top".

Justin also hinted that he'd like to release the as yet untitled LP on his birthday, which is 17 Mar.