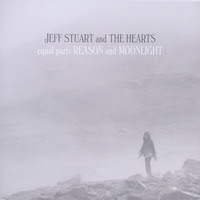 Jeff Stuart & The Hearts – Equal Parts Reason And Moonlight (Independent)
Recently named one of the albums of the year by the CKUA Radio Network, Jeff Stuart & The Hearts’ sophomore release “Equal Parts Reason And Moonlight” is a terrific mix of frugal neo-roots charm, fragile indie rock and memorable songs. It’s not an everyday sound by any means, and drawing comparison with other artists isn’t easy, though there are influences at play. Stuart’s words are haunting and laden with wintry imagery, which is reflected in both the arrangements and the album’s artwork. It’s a near perfect record for the season and provides suitable accompaniment to long dark evenings, drinking hearty red wines and putting the world to right. Log fire optional.

The sextet initially made waves with their 2009 “Black Dogs Blue Giants” debut, which earned rave reviews in their local Canadian press. I can only assume “Equal Parts Reason And Moonlight” will follow suit, and I’ve no doubt that this time around glowing reports will be forthcoming from much further afield. The many attributes of this fine record are simply impossible to resist or ignore. The album opens with the six minute “Apple Tree”, its steady, unhurried rhythm provides the album’s heartbeat. “Pale White Lie” distills their spectral qualities into a sublime two minutes and “Swallowed By the Morning Sky” maybe a shade more upbeat and urgent, but it’s no less atmospheric.
http://www.jeffstuart.com/
Rob F.