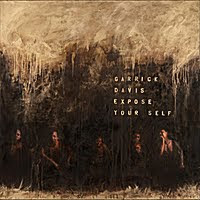 Garrick Davis & The Fabulous FunkyBand - Expose Your Self (Laughing Man Records)
Garrick Davis is a self-taught guitarist-singer-songwriter from San Francisco, and “Expose Your Self” is his third album. A regular performer on the west coast of the U.S., both solo and with his Fabulous Funky Band, he’s obviously honed his sound on dozens of different stages, and he manages to transfer some of that live performance excitement into the studio. His new album (I’m sure the title refers to opening oneself up to new experiences rather than the sort of thing that attracts police attention) indicates he’s a performer with all-round capabilities: strong songwriting, a good bluesy voice and an easy and varied way with a guitar. In fact, it’s the variety of styles that makes “Expose Your Self” stand out from the pack.

His fusion of blues, rock, funk and Americana means that he’s equally adept at ballsy rockers like the opening cut “So Glad I'm Here”, as he is when he slows it down and gets soulful on the title track or the Kravitz(esque) “I Give You Trouble”. The Americana influence can be heard on “Lookin' for Something”, though the rhythmic pulse is decidedly fluid. There are a couple of tracks that are just outstanding, and if you’re on the look out for iPod fodder then you really need both “Sotchiatta” and “Peace Of My Mind”. The former is a spellbinding story song that would have been a standout track on the first Blues Traveler album, with it’s weaving harmonica and Davis’ languid phrasing. The latter seems a slight thing on the surface, with its barely audible vocal effects and handclap beat, but I find myself more absorbed in its haunted atmosphere each time I listen. If only it was ten times as long. Seriously.
http://garrickdavis.com/
Rob F.
Posted by Bangs at 12/09/2011 08:17:00 am