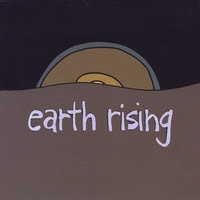 Earth Rising - S/T EP (Independent)
Earth Rising is an indie quintet from Las Vegas, and their new self-titled EP is their debut release. I’ve always wondered what the grassroots music scene is like in Las Vegas, where I imagine the alternative isn’t always encouraged, but if a band like Earth Rising thrives, it can’t be all bad. Their mix of progressive, indie rock, with a Bristolian trip-hop vibe is a persuasive proposition, and in vocalist Rachel Delgado they’ve a front woman who rivals Saint Etienne’s Sarah Cracknell for uncomplicated pull.

Guitarist EJ Delgado brings a glassy precision to the project. On “Coming Home” he takes the lead, with the minimum of fuss he lays brittle chords around a flaying, muscular wall-of-sound, and the effect’s quite stunning. On “Complete” they change tack completely, Delgado’s guitar finds some funk, and the drummers / percussionists, Luis Mendez and Jon Whisenant, hit an abstract groove. Keyboards and vocals carry the melody. It’s a great track that hovers somewhere between he dance floor and the chill-out room. Six tracks in total, which is enough for now, but I hope there’s a full-length release in the pipeline.
http://www.earthrisingmusic.com/
Rob F.
Posted by Bangs at 12/09/2011 08:35:00 am