Hitchhiker's Guide to the Galaxy set for stage return... 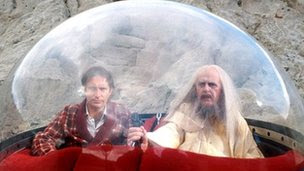 Original cast members of the TV and radio versions of The Hitchhiker's Guide to the Galaxy are reuniting for a new stage production.

The show will star Simon Jones, who played lead character Arthur Dent in the TV and radio versions of Douglas Adams's sci-fi comedy.

It will be staged as a radio recording, which will be made available for download after the tour.

The show's first performance will be at Glasgow's Theatre Royal on 8 June.

The Hitchhiker's Guide to the Galaxy Radio Show - Live! will play at a host of other venues throughout June and July, ending at the Edinburgh Playhouse on 21 July.

The production has been adapted and written by its director Dirk Maggs, who was behind Hitchhiker's 2003 revival on radio.

Susan Sheridan, who played Trillian in the original 1978 radio adaptation, will also appear in the show, alongside Geoffrey McGivern who will reprise his role as Ford Prefect.

A number of guest stars are due to provide the voice for the guidebook which steers Dent around the universe.

Their names will be announced closer to its opening date, the show's producers said.

Adams's creation began life on radio in 1978, with the initial novel of a "trilogy in five parts" published one year later.

The Hitchhiker's Guide to the Galaxy, which was made into a BBC TV series in 1981, made a return to radio in 2003.

A year later, a big-screen version was made starring Martin Freeman as Arthur Dent and Stephen Fry as the voice of the guide.

A number of other stage productions have been created, the most recent being produced by Wales' Theatr Clywd in 1980.