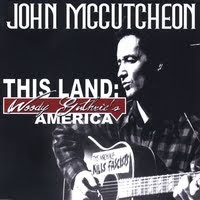 John McCutcheon - This Land: Woody Guthrie's America (Appalsongs)
This is heritage material that you may think, at first, needs no makeover. These are the very same songs that inspired, and helped launch, Bob Dylan, and that, should say enough.

When I say makeover, I mean anything from a respectful attempt to copy the originals to a refreshingly new interpretation. Fortunately, John McCutcheon has put considerable thought into this project, and made a great effort with some of the material to renew it, if not for today, then certainly for recent times. Two of the songs ("Old Cap Moore" and "Harness Up The Day") he has completed the writing of, by invitation of the Guthrie family. I was mildly surprised how little I resented these efforts. He got me on his side straightaway. His voice has a strong, melodic edge to it, as he delivers some of these songs with an almost European folk tinge to them. He also introduces a variety of alternative attractions, from the relatively straightforward accordion and fiddle accompaniment on "Deportees", the haunting cello on "Ludlow Massacre", to the rejuvenating soprano sax on "Mail Myself To You" and "Pastures Of Plenty".

Was this a necessary venture? Well, it is undoubtedly an authentic and honest attempt to pay homage to a giant of America's musical past, an attempt to re-interpret this varied material without a trace of cashing in. It’s some distance from being a 'tribute' album, which is no bad thing at all. Whether you are familiar with the material hardly matters. If you are, then you should recognise it for its integrity; if this is new to you then it should make you want to seek out the original Woody Guthrie recordings, and investigate the man who inspired a generation of American folk musicians. John McCutcheon is but one of them.
http://www.folkmusic.com/
Kev A.
Posted by Bangs at 12/10/2011 03:48:00 pm