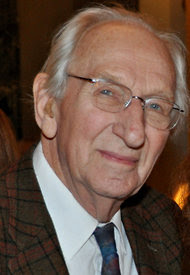 CLIVE ROBBINS DIES
Clive Robbins, the inspirational music therapist, has died aged 84. His death was confirmed earlier this week by the charity that bears his name, Nordoff-Robbins.

Birmingham-born Robbins began to work in music education after a serious injury while serving in the RAF brought to a premature end a promising career as a pianist. He became a teacher for Sunfield Children's Homes in the Midlands, which provided education based upon the educational philosophies of the Austrian philosopher Rudolf Steiner. He primarily worked with mentally disabled children, something he later described as "the first profoundly fulfilling experience of my life".

It was at Sunfield that he met American musician Paul Nordoff, who was fascinated by Steiner's philosophies. Nordoff spent some time at Sunfield in 1958, and was so impressed with what he saw that he returned a year later to explore his growing interest in the therapeutic potential of music. And so the ground breaking work that is now synonymous with the name Nordoff-Robbins began.

The two men spent much of the 60s touring curative homes and educational institutions, first across Europe, and then the US, advocating, promoting and teaching what they called therapy in music. They showed how some of the most disabled and unreachable children could be persuaded to participate, and to build social and self-awareness, discipline and concentration, by being encouraged and enabled to play simple musical compositions. Or, as the Nordoff-Robbins charity put it: "Placed in front of a snare drum and cymbal, these children revealed their sensitivities and their expressive, receptive and relational abilities in their musical responses".

It was a prolific period in which Robbins and Nordoff developed their approaches, and shared their work through lectures, publications and media exposure. Six years in Philadelphia allowed more formal research to be undertaken, funded by the US National Institute Of Mental Health, and later the two men spent seven years in Europe lecturing via the American-Scandinavian Foundation. Over the years individuals and organisations across the world became specialists in music therapy based on Robbins and Nordoff's work.

The two men's working partnership came to an end in 1974 for various reasons, but their work, ideas and names lived on, not least because the same year in the UK one Sybil Beresford-Peirse, who had set up a music therapy centre at Goldie Leigh Hospital in South London, established the first full-time Nordoff-Robbins training programme. With support from the UK music industry, this programme grew throughout the 70s, and morphed into the Nordoff-Robbins charity in 1980.

Robbins himself returned to the US in 1975 and remarried. With his new wife, also a music therapist, he took various roles at US institutions furthering the music therapy cause, while also continuing to lecture in Europe. In the 1980s they moved to Australia where they founded a Nordoff-Robbins Association, and then in 1989 they were involved in the creation of the Nordoff-Robbins Center for Music Therapy at New York University.

Robbins remained active throughout all of his life, with links to the various Nordoff-Robbins organisations. In more recent years he was particularly active in South East Asia, where his teachings and approaches not only saw an expansion of music therapy work, but were also applied to other medical disciplines.

Paying tribute earlier this week, the Nordoff-Robbins charity in the UK wrote: "Clive's gift was to help Paul Nordoff harness his musicianship, set a direction, documenting the work and finding a language for communicating their ideas. By the end of his life, beloved around the world across a variety of cultures, Clive had inspired thousands with his love, emotion and sensitivity, his embracing personality and humanistic values. His often rapturous descriptions of the power of music and its impact on the emotional states of human experience were profoundly moving to the many who heard and shared his passion for music and people".