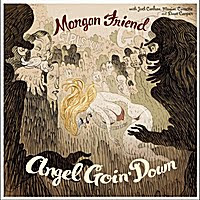 Morgan Friend - Angel Goin’ Down (Independent)
Morgan Friend’s debut is “a collection of redemption songs written from a sinner's point of view”. I checked Google, and I couldn’t find any major crimes committed by Friend, so he’s probably talking about the minor peccadillos, the stuff that makes life fun, or the afterlife a nightmare, depending on your point of view. Art, in its many forms, has been used as a form of redemption, probably since our ancestors started daubing on cave walls, so while Friend’s concept isn’t breaking any new ground, he approaches his topic with such rough and ready enthusiasm, it’s difficult not to be swept along.

Recorded live-to-tape, with musical friends and family, on minimal equipment, “Angel Goin’ Down” revels in its lo-fi approach, drawing an easy looseness from those involved, and not getting hung up over, or stressed out by trivial imperfections. Everyone sounds like they’re enjoying themselves even when the self-recriminations are being dished out on songs like “No One But Me To Blame” or the crying-in-my-beer balladry of “She Hurts”. The title track suggests redemption may not be the priority, and “Charlie Sheen” will probably have Betty Ford spinning in her grave. We’ll brush over the songs about drinking whiskey and eating roadkill squirrels, but you should try and hear “Old Alberta Red”, the sort of story song that would’ve made a man’s career back in the day
http://www.morganfriend.com/
Rob F.
Posted by Bangs at 12/09/2011 08:29:00 am