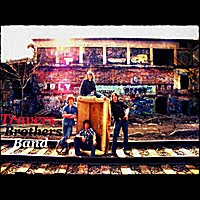 With a sound rooted firmly in the late ’60 and early ‘70s, guitarist Kyle regularly steps up to the plate to provide the sort of solos that link directly back to musicians such as Jimi Hendrix and Duane Allman. There’s no denying the simple thrill of a well-executed six-string solo, however unfashionable, especially when placed within the right setting, and this they do repeatedly. The band are consummate musicians, jam-band aficionados with a deep understanding of their preferred genre. Put simply, they rock, and in doing so, their enthusiasm, gusto and talents carry the day.

“TBB” is their debut studio album, and there are plentiful highlights. Opening with “Bad Thing Comin'”, it begins with a wonderfully fluid bass line, which sticks around to deftly spar with the lengthy guitar solo that ends the track. “Time for a Change” doesn’t shirk its soloing responsibilities but indicates they’re just as adept at songwriting, and “TCE” touches on metal themes of doom and apocalypse, but with a certain lightness of touch. The six-minute “Shanty Town Shuffle” may imply a reggae rhythm, but instead it unwinds and expands like a long-lost Stevie Ray Vaughan number.
http://traversbrothersband.com/
Rob F.