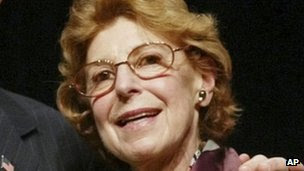 US abstract expressionist painter Helen Frankenthaler has died aged 83 after a long illness, her nephew has said.

Clifford Ross told the Associated Press that his aunt passed away on Tuesday at her home in Darien, in the US state of Connecticut.

She burst on to the art scene in 1952 with Mountains and Sea, a large-scale canvas.

The postwar colourist, whose career spanned six decades, was awarded the National Medal of Arts in 2002.

Born in 1928 to a wealthy Manhattan family, her father was a New York State Supreme Court judge and her mother a German immigrant.

Frankenthaler was a leading light of the "soak-stain" technique that involves applying thinned oil paint to unprimed canvas, creating a watercolour effect.

Her style is credited with having helped American art make the transition from Abstract Expressionism to Color Field painting.

Frankenthaler, who was inspired by Jackson Pollock and Willem de Kooning, in turn influenced such artists as Morris Louis and Kenneth Noland.

Pollock's influence was evident in Frankenthaler's preference for large-scale canvases and painting on the floor rather than on easel.

She created her breakthrough work Mountains and Sea - a glowing landscape evocation measuring 7ft by 10ft - when she was just 23, following a trip to Nova Scotia.

Frankenthaler turned to acrylic paints in the 1960s to explore open, flat fields of colour, a style on display in her 1973 work Nature Abhors A Vacuum.

She also worked with ceramics, sculpture, woodcuts, tapestry and printmaking.

In 1958, she wed fellow artist Robert Motherwell, a marriage that would last for 13 years.

She is survived by her second husband, Stephen DuBrul.