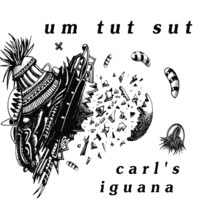 Carl’s Iguana - Un Tut Sut (Independent)
Taking their name from a snippet of dialogue from Tina Fey’s “Baby Mama” movie, Carl’s Iguana is a quartet from Charlotte, NC (incidentally, there’s no iguana or anyone called Carl in the band). Their album “Un Tut Sut” is mostly instrumental, when a voice is heard on “Woman in Outer Space”, it’s not so much a song, but more a vocal effect to compliment to John Burns’ cavernous dub basslines. It’s not a wholly representative track, but then, no individual track truly is. They’re experimentalists, exploring less travelled musical paths, but providing excellent entertainment on route.

If we must pigeonhole them, then they seem happy with the ‘acid jazz’ moniker, though they must be aware that it tells only a fraction of their story. For example, the jaunty European folk-jazz approach utilised on “Into the Window Like Sugar” is followed immediately by “Diggle”, a track that Chris Wood might have brought to Traffic’s “John Barleycorn” album – and just so you know, that’s a sizeable compliment. “Sunstroke” with its heavy, heavy organ, courtesy of Chris Steude, is tailor made for the opening theme of the grooviest cop movie ever made. In fact someone should make the movie just so they can use the music. When they play it straight on the final track, the all too short “Blue Spot”, its smoky, after-hours vibe provides a perfect conclusion.
http://www.reverbnation.com/carlsiguana
Rob F.
Posted by Bangs at 12/15/2011 06:48:00 pm