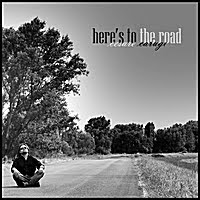 Cesare Carugi - Here’s To The Road (Roots Music Club)
Cesare Carugi is a singer-songwriter, born and raised in Italy, though heavily influenced by American artists such as Springsteen, Dylan, Tom Petty and Steve Earle. It works because he sings his songs in English with a rootsy, country voice and his band sound like they earned their musical spurs traversing the Texas chitlin’ circuit. I imagine American musicians aren’t easy to find in Italy, though Chicago singer-songwriter Michael McDermott is almost resident, and turns up on “Here’s To The Road” to duet with Carugi on one song.

I imagine it’s a stamp of approval that is most welcome for an artist making music so far from the source of his inspiration. It’s well deserved. Songs like the opening track “Too Late to Leave Montgomery” indicate an artist fully in tune with the concepts that underpin much American music: the roads that stretch forever and the local radio stations that provide the soundtrack. The artists that have influenced Carugi are the masters of his chosen genre, and he’s learnt well. “Caroline” builds the tension beautifully before the chorus allows some kind of relief and “Dakota Lights & The Man Who Shot John Lennon”, a piano steeped slower number, shows a wholly different face to Carugi’s American dream.
http://www.cesarecarugi.com/
Rob F.