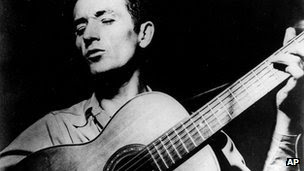 Folk singer Woody Guthrie's writings, recordings and artwork are to go on display in the US after they were bought by a charitable foundation.

The George Kaiser Family Foundation said it planned to open a four-building arts hub in Oklahoma next year to house the collection.

The archive includes a handwritten copy of the late singer's anthem, This Land is Your Land.

Guthrie died of Huntington's disease, a neurodegenerative condition, in 1967.

The archive had been housed previously in the home of the songwriter's daughter.

It features original musical recordings, handwritten songbooks and almost 3,000 song lyrics as well as more than 700 pieces of artwork, letters and postcards.

The foundation said it would open the Woody Guthrie Centre in Tulsa, by the end of 2012 to mark the centennial of the singer's birth.

It added the centre would feature public displays from the Guthrie archives "so the story of this extraordinary Oklahoman can be told for generations to come".

Many songwriters including Bruce Springsteen, Bob Dylan and Billy Bragg have cited Guthrie as an influence on their work.