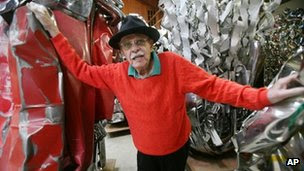 US artist John Chamberlain, celebrated for turning scrap metal into sculpture, died in New York on Wednesday at the age of 84, his widow has announced.

The Indiana native began working with junked car metal in the late 1950s and had work exhibited all over the world.

Paper bags, aluminium foil and foam rubber were among the other materials he worked with to create his pieces.

A retrospective of his work will be on display at New York's Guggenheim Museum from February next year.

Born in Rochester, Indiana in 1927, John Angus Chamberlain was the son of a saloonkeeper.

He won a place at the School of the Art Institute of Chicago but left after 18 months. He went on to find a home at Black Mountain College in rural North Carolina.

According to the New York Times, Chamberlain "almost single-handedly gave automotive metal a place in the history of sculpture".

"I think of my art materials not as junk but as garbage," the paper quoted him as once saying. "It goes from being the waste material of one being to the life-source of another."