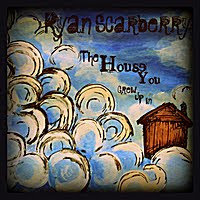 Ryan Scarberry - The House You Grew Up In (Independent)
There’s no shortage of singer-songwriters in the world, which is no bad thing, but it’s not easy carving out a sound and style that sets you apart from the pack, and not many succeed. Ryan Scarberry is one of the few. I can spot lots of influences, from Paul Simon to Rod Picott, but nothing that overwhelms, and his songs have the knack of gently taking the listener by the scruff of the neck and not letting go. Foremost, he considers himself a storyteller, and he does spin a good yarn, but he does so with a voice that’s simultaneously easy and quite distinctive, and he doesn’t forget to pack tunes.

“The House You Grew Up In” begins with “While You Were Waiting”. It’s pleasant enough, but never seems to really get going. Perhaps its pleasures are too abstract, especially as it fades directly into “Good Day”, with its ingrained melodiousness, sublime backing vocals and instant hook. Backing vocalist Janelle Houston gets more to do on “While You Were Waiting”, including the opening lines. It’s a fine track, which gets even better when they sing together. Perhaps my favourite is “Riverboat”. Here Amy Corbett joins Scarberry on viola, and with its themes of loss and treasured memories, it might have been too weighted towards melancholy, but instead and it’s uplifting and altogether heartening.
http://ryanscarberry.com/
Rob F.
Posted by Bangs at 12/20/2011 08:47:00 am